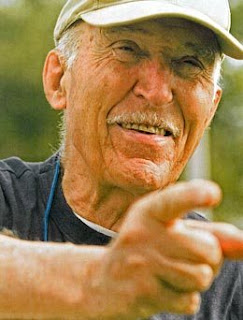 We've received the sad news that legendary Civil War Historian and Lifetime member of our Round Table Ed Bearss has passed away. Ed was 97 years old.

Edwin Cole Bearss was born in Billings, Montana, on June 26, 1923. He grew up on his grandfather's ranch near Hardin, Montana, in the shadow of the Rosebud Mountains and within a bike ride of the Little Bighorn Battlefield. In Ed's own words,

That interest was reflected by the fact that on the ranch, the E Bar S, he started naming the cattle for Civil War generals and battles. He often said his favorite milk cow was Antietam.

He attended a one-room school in Sarpy, Montana and in 1937 was sent to St. John's Military Academy in Delafield, Wisconsin. He graduated from Hardin High School and, with World War II underway, he immediately joined the Marine Corps (Ed's family has a long history with the Marines, his father, Omar, served in World War I.  His father’s cousin Hiram I. Bearss, a famous Marine colonel nicknamed “Hiking Hiram,” fought in France during World War I and received the Medal of Honor for service in the Philippines in 1901.  Ed’s daughter and grandson also served in the Corps).

He served with the 3rd Marine Raider Battalion and 1st Marine Division. In the invasion of Guadalcanal and New Britain, Ed was seriously wounded by machine gun fire. He spent 26 months in various hospitals for multiple surgeries, bone grafts, and rehabilitation. In fact, it was only a couple of years ago that Ed was treated at a VA hospital during a trip to Johnstown, PA for a piece of bone fragment that worked its way to the surface after 75 years. He got quite a kick out of telling that story.

After the war, he took advantage of the GI bill to study at Georgetown University, receiving a bachelor's degree in Foreign Service in 1949. He took a job with the Navy Hydrographic Office in Suitland, MD, where he stayed for 3 years. He then attended Indiana University and graduated with his M.A. in history, writing his thesis on Patrick Cleburne.

Ed’s career with the National Park Service got its start in 1955, when he was stationed at Vicksburg, Mississippi as a Park Historian. While there, he did the research leading him and two friends to the long lost resting place of the Union gunboat Cairo and he was instrumental in its rise from the bottom of the Yazoo River. He also located two forgotten forts at Grand Gulf, Mississippi and helped get Grand Gulf named a Mississippi State Military Monument. He was the founder of the Mississippi Civil War Round Table in 1956, which later consolidated with the Jackson Civil War Round Table.

In 1966, Ed was transferred to Washington, DC. He rose to prominence and became the Chief Historian in November 1981, a position he held until July 1994. Then he served as the Director's Special Assistant for Military Sites until his retirement on October 1, 1995. But Ed never really retired; through lectures, television, writing, and as a renowned battlefield guide, he continued his association with our nation's military history. He spoke to our Round Table and many other round tables many, many times. He also served as our guide for more field trips and day tours than can be counted. His final field trip for us was the 2013 trip to Vicksburg. He last spoke to us in September 2019 on the discovery and raising of the Cairo.

Ed received numerous awards in the field of history and preservation: the T. Harry Williams Award; the Bruce Catton Award; the Alvin Calman Award; the Bell I. Wiley Award and others. He was chosen Man of the Year at Vicksburg in 1963. He received the Harry S. Truman Award for Meritorious Service in the field of Civil War History. In 1964 he was chosen to become a member of the Company of Military Historians and was voted a Fellow in that organization. In 1983 he won the Department of the Interior's Distinguished Service Award, the highest award given by the department. He received a commendation from the Secretary of the Army in 1985. He is a veteran of 50 years of Government Service.

He has done detailed studies for the National Park Service for many areas: Vicksburg; Pea Ridge; Wilson's Creek; the Ray House; Fort Smith; Stones River; Fort Donelson; Battles around Richmond; Bighorn Canyon; Eisenhower Farm; the gold miners' route over Chilkoot Pass; LBJ Ranch; Fort Moultrie; Fort Point; William Howard Taft House; Fort Hancock; Boston Navy Yard; Herbert Hoover National Historic Site and others. He was instrumental in the establishment of Monocacy National Battlefield. In 1990, he was featured as a commentator on the PBS program The Civil War, which as of this writing is the most popular program ever to be broadcast by that network. More recently, he has appeared on the Arts & Entertainment Channel's Civil War Journal.

Ed was a force of nature and always at his best “on the ground” of a battlefield. Those of us who were privileged enough to see him in “full sway,” with eyes closed and voice booming, will never forget. He made history come alive and truly was its “Pied Piper.” We won’t see the likes of his amazing charismatic personality again.

Please join us via Zoom

to hear our speaker:

TOPIC: "The Confederate Invasion of the New Mexico Territory"

Click above on the Tab "MEETINGS/TOURS" for more information about how to attend.

ALL ARE WELCOME
We hope to see you there!

Enter your email address below and hit submit to get updates about our events emailed to you:

After you submit your email address, you will be asked to enter a "Captcha" code to verify you are not a robot. You will then receive an email from us via "Feedburner," the service we use to manage subscribers. Please follow the instructions in the email to confirm you would like to receive CWRTDC emails. We do not share email addresses with non-members. For more information about this process, go to www.cwrtdc.org/p/email.html.

NOTICE TO INDIVIDUALS LOCATED IN THE EU:

The submission of your email address constitutes your consent to the collection, processing, and sharing of your user information as described in our Privacy Policy.